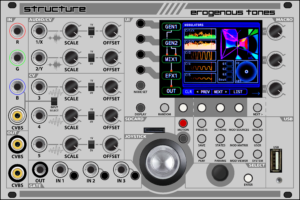 STRUCTURE is a visual generator module that is based internally on an OpenGL GLSL node based platform. It uses the concept of node structures to push visuals through the system.

STRUCTURE contains a video input system that you can select between two formats, Composite video or LZX 1V RGB (with sync applied to rear of module). The Composite input does full color decoding. Input video can be mixed through effects, with other generators, effected with audio, etc.  Input video can be NTSC or PAL, 480i.  STRUCTURE auto detects and converts video inputs.

Three CV rate inputs can be used to modulate a variety of controls on each node.

All CV can be set independently to 1V or 5V expected input. Each CV has a scale control and a positive offset control for fine tuning incoming CV voltages.

A joystick can be used to modulate controls in real time, or used to record motion information that is played back in a loop.  In addition, the joystick has a metal hat for nice weighted movement.

Three macro knobs on the top right, allow for global changes to the output node which are user configurable.

STRUCTURE has a USB input, which you can attach MIDI interfaces, MIDI keyboards, controllers, etc, or even a standard PC keyboard or numeric keypad.  You can assign actions or state changes to trigger from any of these input sources.

STRUCTURE has a full color 320×240 preview screen which also provides lots of feedback when using.

STRUCTURE REQUIRES EURO POWER EVEN WHEN USING AN ALTERNATE POWER BRICK.  THE PURPOSE FOR THE POWER BRICK IS TO ALLEVIATE THE +12V CURRENT LOAD ON THE EURO SUPPLY IF YOU HAVE A CROWDED CASE.  YOU CANNOT RUN STRUCTURE WITHOUT EURO POWER.  STRUCTURE NEEDS THE -12V RAIL FROM THE EURO POWER FOR THE CVBS OUTPUT.

As indicated in the “Getting Started” guide, STRUCTURE has the ability to be partially powered off of a dedicated +12V power brick that will reduce the entire positive rail current from your eurorack case.  There is a barrel connection on the back of STRUCTURE, which is designed to auto-switch when +12V power is present on the jack.

Note: The Power Brick above can supply >8 amps of power, which is far more than STRUCTURE will use.  If you don’t anticipate using other modules that support this auxiliary +12V method, you can select a lower current version with the same connector setup.

Note: This +12V auxiliary standard is the same as what is implemented in certain LZX modules, like Liquid TV.  LZX and ET are working on a +12V distribution module for bringing in extra +12V power on the front (or side) of a case for power hungry visual circuits. (So you won’t need a brick for every module, just one).  Stay tuned for more details.